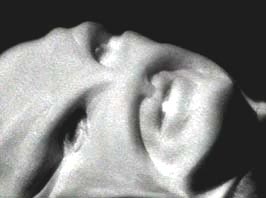 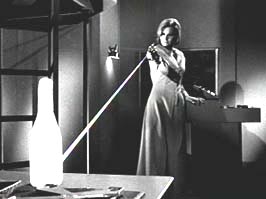 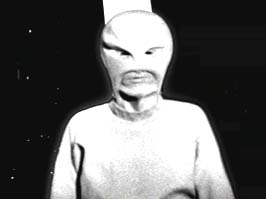 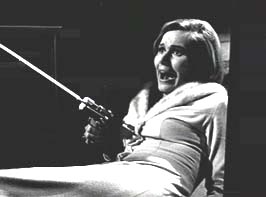 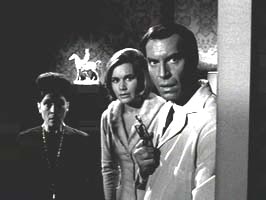 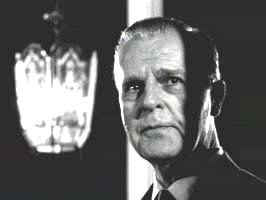 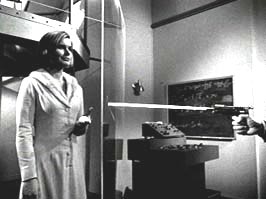 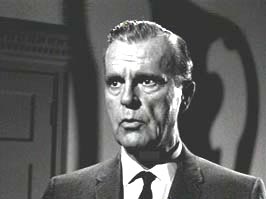 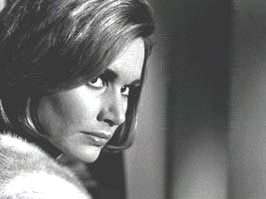 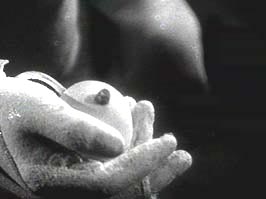 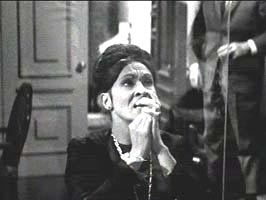 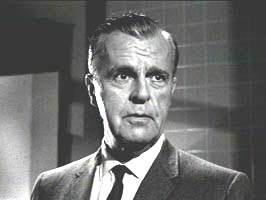 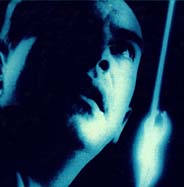 A woman steals a force field device from an alien, with unexpected results.

A great episode for star watchers. You get Martin Landau (“Space: 1999”, “Mission Imposible”), Sally Kellerman (“Star Trek”, “MASH”), Neil Hamilton (“Batman”), and Chita Rivera (“West Side Story”) all in one episode. This show has an involving story, dealing with first contact with an alien race, and a powerful ending. 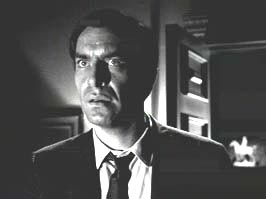 A scientist develops a special laser light, zapping it up into the heavens. Before long an alien appears, riding the light beam down into the scientist’s lab.

The alien demonstrates a force field shield, which nothing can penetrate. After convincing the alien to lower it’s protective shield, the scientist’s wife shoots it, stealing it’s shield device.

The woman demonstrates the shield for the scientist’s wealthy father, but she is unable to lower it, freaking out. The dying alien removes the shield from around her. However, the woman, her mind gone, believes the shield is still in place. 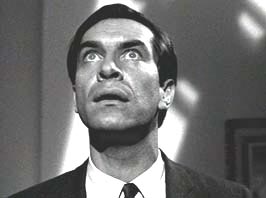 Director John Brahm’s, THE BELLERO SHIELD, is an out of the ordinary tale of alien/human contact.

Martin Landau, under Brahm’s firm direction, delivers a well modulated performance. He is convincing as a dedicated scientist, more interested in helping mankind than in fame or power.

Sally Kellerman gives a strong performance as Landau’s ambitious wife. Thrilled to have a space alien in her house, she excitedly tells housekeeper Chita Rivera, “It’s real, it’s alive, and it’s ours!”

Chita Rivera (“West Side Story”) is fascinating as Landau and Kellerman’s servant. She glides around the house silently, catlike, with bare feet, her dancing training evident in her every movement. 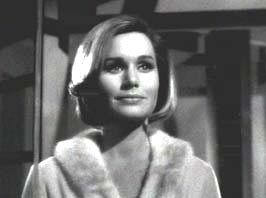 Neil Hamilton, Commissioner Gordon on TV’s “Batman”, does a nice turn as Landau’s wealthy mogul father. He does a credible transition from cynical to amazed. He becomes dazzled by the Bellero shield, and the fame it could bring his son, and by reflection, himself.

My favorite scene is when the alien appears, riding down a beam of laser light into Landau’s lab. While not realistic, the scene has a great fairy tale/fable feel to it, entirely in keeping with the yarn being told.

Director of Photography, Conrad Hall, delivers consistently creative visuals. Particularly effective is a shot of Landau and Rivera, photographed through a shelf of glasses.

The music, by Dominic Frontiere, varies between ominous and mushy. As usual, the ominous stuff works better.

THE BELLERO SHIELD should be fairly watchable for most Sci-Fi viewers. Landau/Kellerman fans will be delighted.

If you liked THE BELLERO SHIELD you
should enjoy:The Galaxy Being, Keeper of the Purple Twilight, The Man Who Was Never Born.
Outer Limits Episode Index