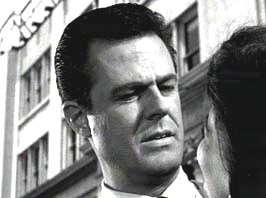 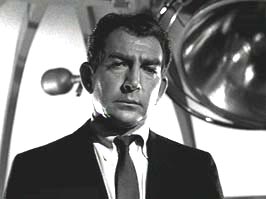 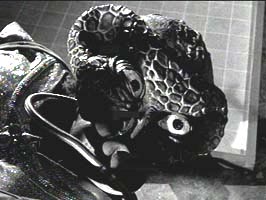 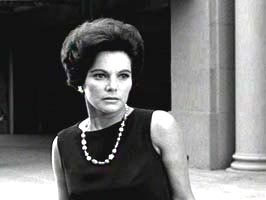 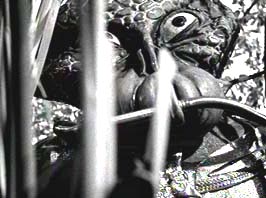 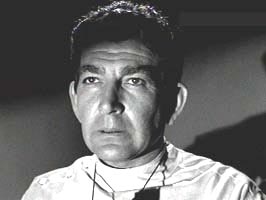 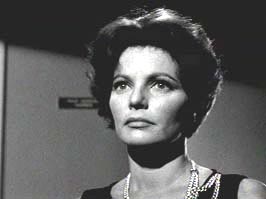 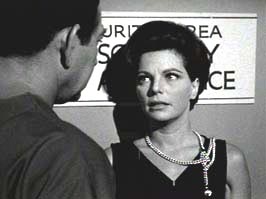 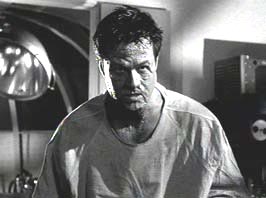 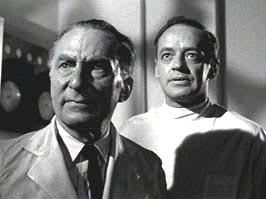 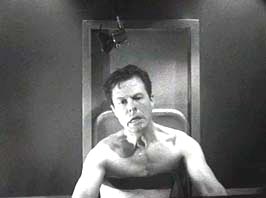 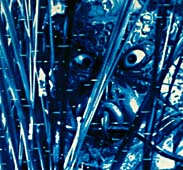 The Architects of Fear

A human is transformed into an “alien,” in an attempt to scare the people of Earth into cooperating with each other.

The premise of this episode, that of a faked “alien” landing, with the intent of scaring the nations of the Earth into world peace, is still pretty intriguing, thirty years later. Fans of Robert Culp (I Spy) will dig his intense performance. The “alien” he becomes is definitely one of the weirder ones in the series. 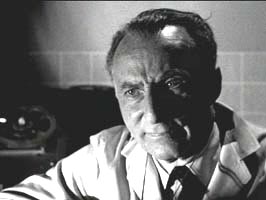 Scientists decide to stage a fake alien landing, to scare the people of Earth into cooperating together. Robert Culp is picked to be turned into an alien.

Culp goes through a series of injections and operations to be turned into an alien. His wife is told he was killed in a plane crash, but she doesn’t believe it.

Alien/Culp lands his spaceship off course. He is shot by hunters. Culp makes it back to the lab, where he reunites with his wife before dying. 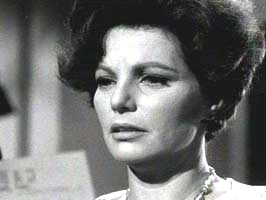 Director Byron Haskin’s, THE ARCHITECTS OF FEAR, is an unusual approach to an alien landing tale.

Robert Culp, who appeared in more “Outer Limits” episodes than any other leading actor, brings credibility and stoic strength to the role of a man undergoing the agonizing transformation from man to “alien”.

Geraldine Brooks, in the role of Culp’s wife, is persuasive as a woman who can’t bring herself to accept that her husband is really dead. When she emotionally says, “If he were dead, I’d know it.”, we believe her.

The Teleplay, by Meyer Dolinsky, contains some of the same kind of quips that Culp was to become so famous for, a few years later in his hit TV series, “I Spy”. While chatting with a doctor about his upcoming transformation, scientist/hipster Culp remarks, “You know, you could have had a great career in a Turkish bath.”

Oddly enough, the central story premise of this episode, an alien landing, faked to influence global behavior, is actually touted by some UFO enthusiasts as an event that a mysterious, super secret international group is planning to stage near the turn of this century. Perhaps these flying saucer conspiracy theorists are also “Outer Limits” fans.

My favorite scene takes place after Brooks is told Culp is dead. She exits, leaving behind a box from a maternity store: apparently she is pregnant now. Culp comes out of hiding and picks up the box. Courtesy of Director of Photography, Conrad Hall, we get a tight shot of the box, as Culp’s hand slides across the top of it, his open hand becoming a fist. With no dialogue, and without even seeing Culp face, Director Haskin delivers a scene with high emotional impact. 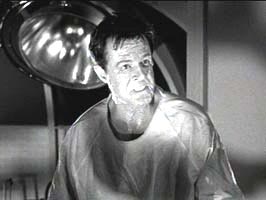 Dominic Frontiere’s music is both sweet and sad. This episode is primarily a tragic morality play, and the music ably underscores this theme.

The FX in this episode are a mixed bag. Culp’s spaceship, a silver tube with a pointy nose and rear fins, is disappointing. When he lands, however, he zaps a station wagon with a ray gun, and the resulting flash of light and burn marks on the ground, once it disappears, are pretty good. Special Effects guy, Si Simonson, as well as Project Unlimited Inc., deserve both the credit and the blame here.

When we finally see Culp as a big headed, saucer eyed “alien”, with oversize chicken legs,, he’s not very scary or convincing. Makeup Supervisor Fred B. Phillips seems to be the guilty party here.

If you liked THE ARCHITECTS OF FEAR you
should enjoy: Corpus Earthling, Deman With a Glass Hand..
Outer Limits Episode Index