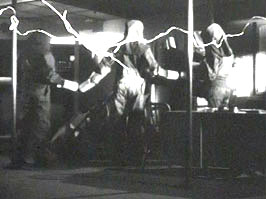 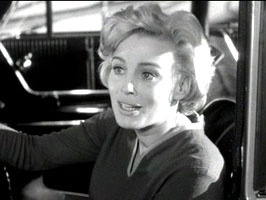 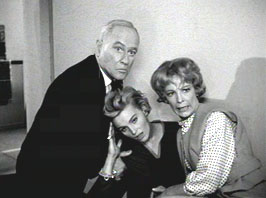 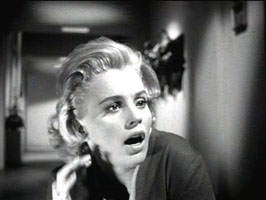 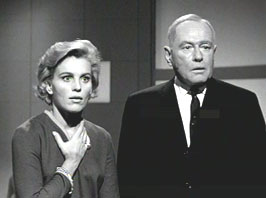 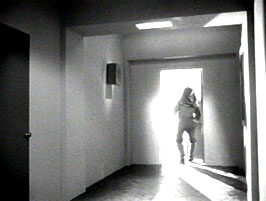 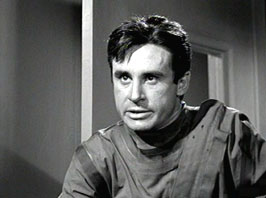 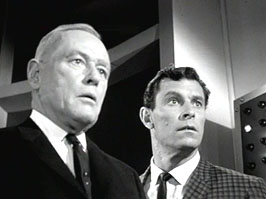 The Production & Decay of Strange Particles

Outer space particles are mixed with radioactive elements in an Earth lab, with bizarre results.

Ever wonder what would happen if you mixed weird matter from outer space with radioactive earth matter? Well, this is the episode for you! George Macready (The Invisibles) gives a broad, hammy, performace as the head of a nuclear reactor science lab. Note Leonard “Mr. Spock” Nimoy, as a doomed nuclear technician. 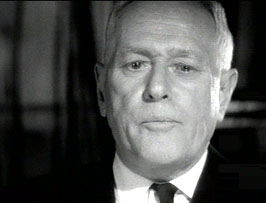 At a nuclear lab, some matter from space is mixed with radioactive elements. The resulting mixture turns a technician into an alien being.

More technicians are turned into energy beings. A chain reaction begins, involving nuclear fission, which may result in a nuclear explosion.

The local community is evacuated to fallout shelters. The head of the lab sets off a controlled fusion explosion, reversing the deadly process and ending the nuclear crisis. 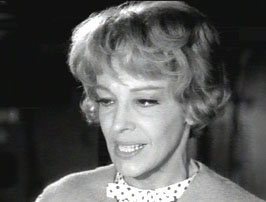 Writer/Director Leslie Stevens’, THE PRODUCTION AND DECAY OF STRANGE PARTICLES, is an unusual tale of nuclear experimentation.

George Macready (“Peyton Place”) plays the head of a scientific lab at a nuclear reactor plant, where his technicians mix odd matter from outer space with Earth-bound, radioactive materials. The result turns nuclear technicians into powerful energy creatures, and sets in motion a chain reaction in the nuclear pile that threatens to blow the area sky high. Maybe this guy should have stuck to his chemistry set!

George Macready, brings an impassioned, breathless delivery to lines like, “The ultra large out there, the ultra small boiling up in our reactor. Their radioactivity is greater than your wildest dreams, like a hole torn in the universe… something seeping in.” Initially on target, Macready’s performance, under Stevens’ indulgent direction, gradually ends up going over the top, much like the reactor’s rising core radiation level.

Stevens’ screenplay has some good, scientific-type dialogue. At one point Macready, discussing the source of the strange matter from outer space he’s experimenting with, states, “Quasi-stellar radio sources. They radiate, they pulse, but they’re not galaxies and they’re not stars. They break every rule in the book.”

Leonard Nimoy (“Star Trek”) shows up briefly as a nuclear technician, taken over by radioactive matter from outer space. It’s a small role, but it’s nice to see the future Vulcan in action.

The FX in this episode involve lightning, smoke, fire, and explosions, all connected to the episode’s radioactive experimentation. Special Effects person, Si Simonson, as well as Project Unlimited, Inc., get the credit.

Much of the music in this episode is the standard, obvious brassy stuff, going up an octave at a time to build tension. Naturally, Dominic Frontiere is, once again, the responsible party.

Director of Photography, Kenneth Peach, gives us clever screen imagery. At one point Macready holds up a photo of the radioactive matter that has burned a hole from another dimension to ours: we see Macready through a clear spot in the photo. This is my favorite scene.

THE PRODUCTION AND DECAY OF STRANGE PARTICLES should be fairly watchable for most Sci-Fi viewers. Those expecting the usual kind of “Outer Limits” alien monster episode may be disappointed.

If you liked THE PRODUCTION & DECAY OF STRANGE PARTICLES, you
should enjoy:The Invisibles & Wolf 359.
Outer Limits Episode Index