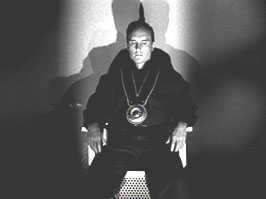 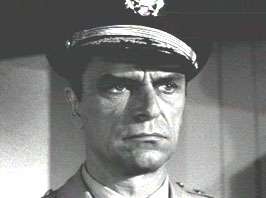 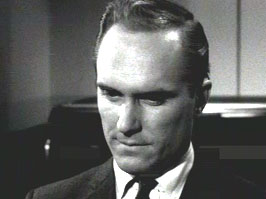 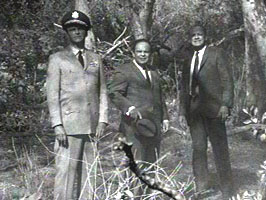 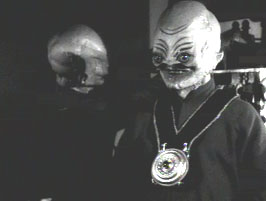 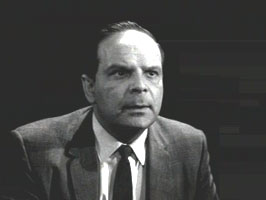 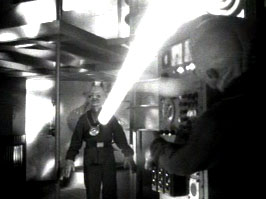 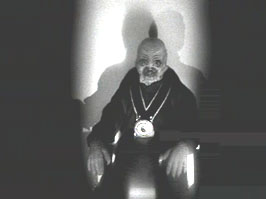 A free-lance, secret agent is sent on a dangerous mission, to infiltrate a flying saucer landing site.

This episode’s premise, involving transforming a secret agent into an alien lookalike, to infltrate a flying saucer, is a clever one. Robert Duvall (The Inheritors) gives a strong performance, particularly in early scene depicting a bar fight in Mexico. 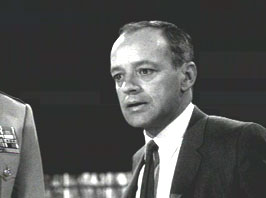 A landed, flying saucer is kept under observation by the military. A mercenary is recruited to deal with the problem.

The mercenary is genetically altered to resemble an alien. He sneaks into the UFO.

The aliens realize the altered mercenary is a fake. Feeling more alien than human, the altered guy blasts off with them, heading for their planet. 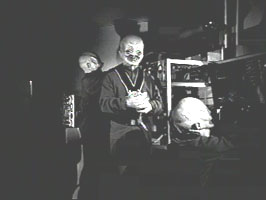 Director Gerd Oswald’s, THE CHAMELEON, is a sometimes interesting tale of human/alien contact.

Under Oswald’s direction, Robert Duvall gives a thoughtful performance as Mace, a former C.I.A. type agent who now works free-lance, taking those assignments others turn down. Even at this early stage of his career, Duvall is a fascinating screen presence.

The script, Teleplay by Robert Towne; Story by Robert Towne, Lou Morheim, Joseph Stefano), has some good Sci-Fi dialogue. After being genetically altered to look like an alien, Duvall enters the UFO. An alien he encounters there tells him, “It’s a good impersonation, Earthman. But we know who you are, the way one of your dogs can tell a cat.”

My favorite scene takes place early on, in a bar in Mexico. When two enemy agents threaten Duvall, he strangles one, scaring the other away. Duvall quickly establishes his character as a deadly killer and a force to be reckoned with.

The FX in this episode do not dazzle. They primarly involve an alien “gun” which shots out sparks and smoke. Special Effects, guy Si Simonson, and Project Unlimited, Inc., are responsible for the non-spectacular FX.

Director of Photography, Kenneth Peach, does some good work here. A long shot of the UFO in the woods, with aliens climbing on it, has a documentary feel to it, in part because of the crisp, black and white photography.

THE CHAMELEON may be somewhat watchable for some Sci-Fi viewers. Robert Duvall fans may dig this one, although his eventual transformation into a silly-looking alien may be a turnoff.

If you liked THE CHAMELEON, you
should enjoy: The Inheritors, The Invisibles.
Outer Limits Episode Index