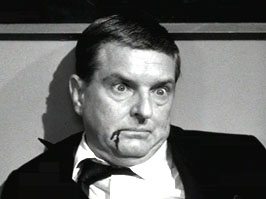 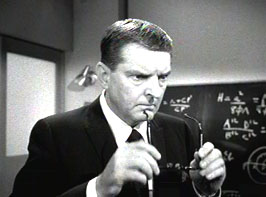 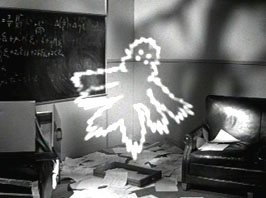 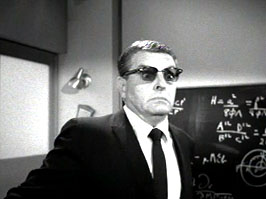 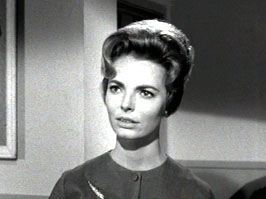 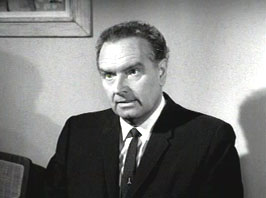 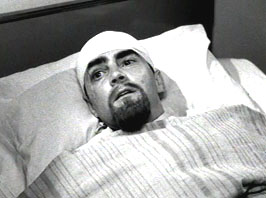 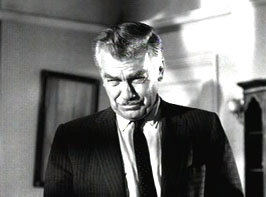 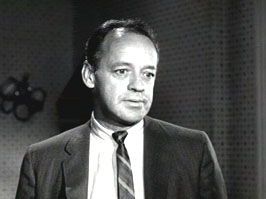 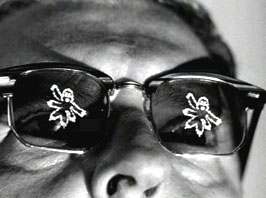 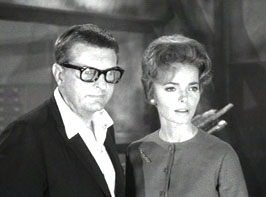 An optical expert develops some glasses which allow him to see aliens.

This is a pro-glasses episode, in which a spectacles wearing optician makes some special lenses, in order than an alien can see in our dimension. Peter Lind Hayes is wry and entertaining as Dr. Stone, the optician. The FX of Eck, the alien, are pretty good. 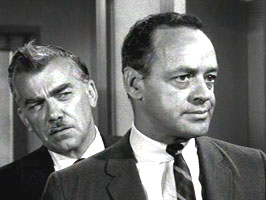 Glasses the optician develops allow people to see the “monsters”. Others can not see the aliens.

The optician develops a special lens which will allow the alien to see in our dimension. The alien finds his escape route and exits, first returning the special lens to the optician. 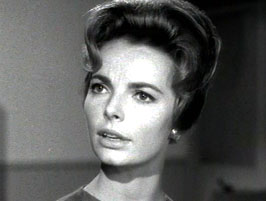 Peter Lind Hayes, as “Dr. Stone”, is a pretty cool customer. Early on, Hayes tours the ruins of his optical center. “It’s interesting. Very interesting,” he murmurs, like an emotionless Vulcan.

Joan Freeman, as Stone’s Associate “Elizabeth Dunn”, offers fine support. She radiates class, and a certain sense of aristocracy, though not snobbishness.

The dialogue in the film, (Teleplay by John Mantley; Story by William R. Cox), is flip, almost camp. When the cops ask Dr. Stone who would have a reason to smash his optical center, Stone quips, “Probably someone who just doesn’t like spectacles.”

BEHOLD ECK! appeared rather late into “The Outer Limits” run. At a time when many episodes were either great, (“Demon with a Glass Hand”, “The Inheritors”), or misfires (“Cry of Silence”, “The Brain of Colonel Barham”), BEHOLD ECK! scores a double, a solid “B” for you non-sports fans out there.

Eck, a twirling, burning crystalline-like alien, is done via decent FX. The ‘Creature’ was designed and photographed by Project Unlimited, Inc. The effective Optical Effects are courtesy of Butler-Glouner, Inc.

BEHOLD ECK! should be fairly watchable for most Sci-Fi fans. Those viewers who wear glasses will especially dig this episode. BEHOLD ECK! is definitely well worth beholding!

If you liked BEHOLD, ECK!, you
should enjoy: The Bellero Shield, Keeper of the Purple Twilight, The Galaxy Being.
Outer Limits Episode Index