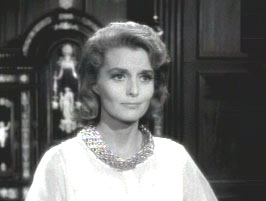 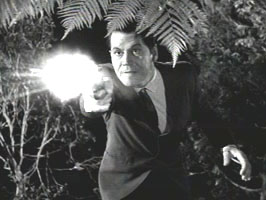 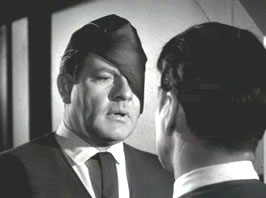 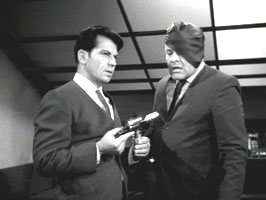 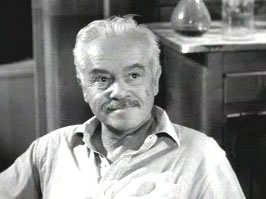 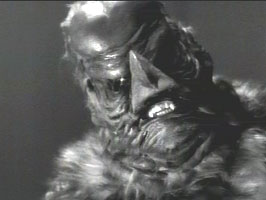 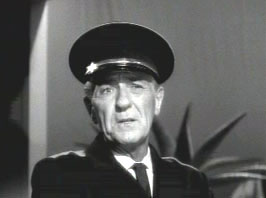 In the future, a man creates a duplicate of himself, to kill an escaped alien monster.

In this episode, set in the future, a man (Ron Randell, who was in “The Longest Day”) sends a duplicate of himself out to deal with a deadly, escaped, alien creature. “The Duplicate Man” offers a fascinating look at the year, 2011, from the perspective of the eary 1960’s. Constance Towers offers warm support as Randell’s wife. 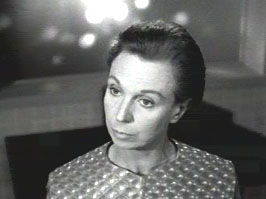 The scientist has a duplicate of himself created, and sends it on a mission to find and kill the alien. The duplicate gradually gains awareness of what it is, becoming more human in the process. 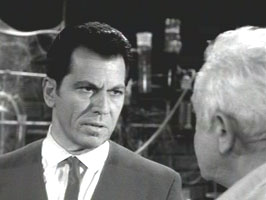 Director Gerd Oswald’s, THE DUPLICATE MAN, is a fairly interesting tale of life, in 2011 A. D.

In the future, a man’s alien creature, which he smuggled to Earth, escapes. The man creates a duplicate of himself to track down and kill the deadly alien.

Ron Randell, as Henderson James, the man who duplicates himself, is a bit stiff. Oddly enough, when Randell plays his duplicate, maturing and becoming more human, he acts warmer, and less stiff, then when he’s playing himself as a regular person. Go figure.

Constance Towers, as Randell’s wife, is a warm, radiant presence. What she sees in driven scientist, Randell, is a bit hard to see, but the same could be said of a lot of “Outer Limits”‘s wives and girlfriends.

The Teleplay, by Robert C. Dennis, (Story by Clifford Simak), contains some interesting rules about human duplicates. They can only exist for five hours, after which they must be destroyed. The idea of human duplicates, with artificially limited life spans, brings to mind the “replicants” in the classic Sci-Fi movie, “Blade Runner”.

To help sell the idea that we’re in the future, everybody uses videophones. Oddly enough, these phones still have dials!

The episode’s alien is a guy, (Mike Lane), in a Big Bird suit, complete with feathers and beak, kind of like “Nightmare on Sesame Street”. Project Unlimited, Inc., is the party responsible for this bird-brained creature.

My favorite scene takes place between the Megazoid, (alien), and Randell’s duplicate, who’s on a mission to kill the alien. The Megazoid tells the duplicate, “You’re a shadow. A temporary Henderson James.” The duplicate answers, “I’m flesh and blood.” The Megazoid replys, “A temporary. No existence. No memory”. A philosophical discussion, between a killer alien and a human duplicate, provides an odd and effective Sci-Fi scene.

The music is ominous, utilizing the organ, and bringing to mind spooky old radio shows, like “Lights Out” and “Inner Sanctum”. Harry Lubin is the responsible party.

Director of Photography, Kenneth Peach, delivers creative screen imagery. Particularly good is an extreme close shot of the supposedly inanimate alien, as it opens one eye!

THE DUPLICATE MAN should be fairly watchable for some Sci-Fi viewers. Those who don’t like silly monsters will not want to take a gander at this episode.