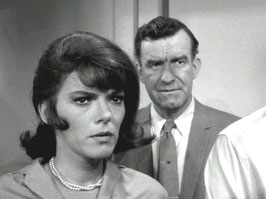 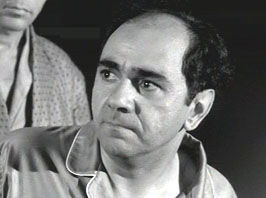 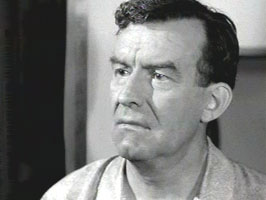 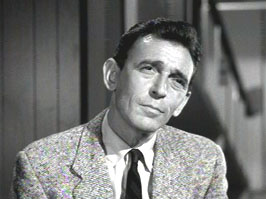 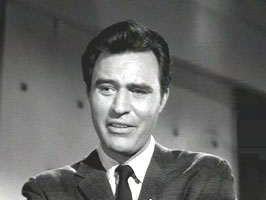 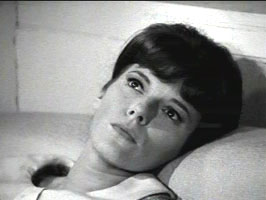 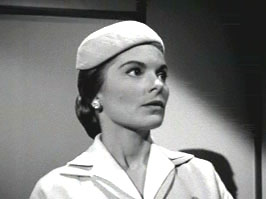 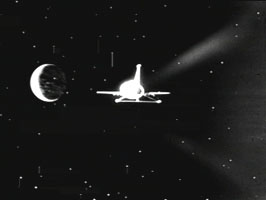 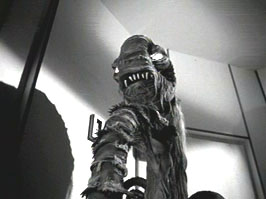 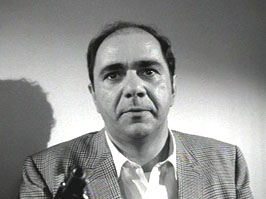 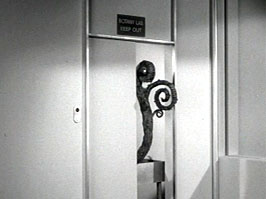 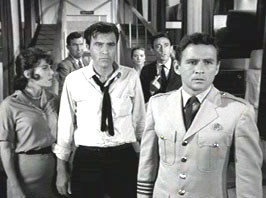 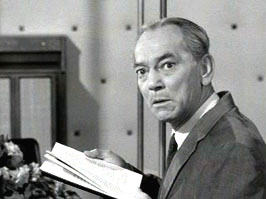 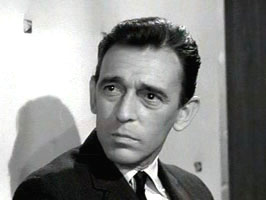 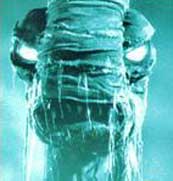 On a simulated space journey, an alien messes with the minds of the human passengers.

In this unusual episode, human volunteers take part in an underground, simulated space journey. Michael Constantine (“Room 222”), offers a compelling portrayal of a boorish building contractor. The FX in this episode, including the stop motion animation of an alien plant creature, are decent. 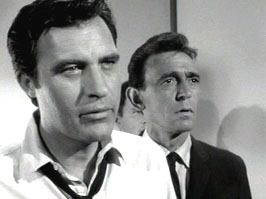 A mixed group of people begin a simulated space trip on Earth. They include an anthropologist, a newspaper reporter, and a building contractor, among others.

Strange things begin to happen: a man finds his dead daughter’s doll in his bed. Another passenger wakes up choking, with strangle marks around his neck, which quickly fade.

An alien, taking over a plant body, makes itself known to the passengers. The alien plant makes the building contractor push the “panic button,” ending the simulated space trip. 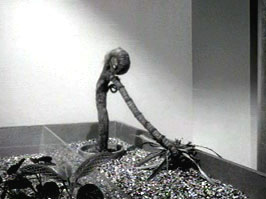 Director Paul Stanley’s, COUNTERWEIGHT, is an odd, psychological study of people under pressure.

As the episode begins, passengers begin an almost one year simulated space journey underneath the desert. If anybody hits a “panic button,” it will disqualify all the passengers from taking part in a real space journey, to an alien planet in the near future.

Some of the characters on this simulated, space ship are quite odd. At one point, an elderly botanist tells his plants, “I’m beginning to hate you as much as you hate me.”

Michael Constantine, who scored big a few years later, as the school principal, on TV’s “Room 222”, is quite good as Joe Dix, a loud and coarse building contractor. He is dynamic, passionate, and difficult to takes your eyes off when he’s on the screen.

The Teleplay, by Milton Krims, (Story by Jerry Sohl), contains good, character-revealing dialogue. When a passenger asks what he’ll do if he encounters natives on the planet he plans to cultivate, Constantine’s Dix replies, “They go. You can’t let savages stop the progress of civilization.”

Director of Photography, Kenneth Peach, delivers some good images. A low angle shot of the alien/plant is fairly effective.

The music in this episode is haunting, sad, and soulful. Harry Lubin is the composer.

My favorite scenes depict the alien, inside a plant “body,” walking around and threatening people. The decent, stop motion photography is courtesy of Project Unlimited Inc., and Van Der Veer Photo Co.

Project Unlimited Inc. takes credit for designing and creating the alien plant “creature”. The unconvincing alien has a tall, plant “torso”, glowing eyes, and jagged teeth with moss, or something, hanging off them. Perhaps flossing is not an intergalactic custom!

COUNTERWEIGHT should be fairly watchable for most Sci-Fi fans. Those interested in the potential stresses and strains of long term space flight will be particularly entertained. COUNTERWEIGHT is worth putting on the counter at the video store!