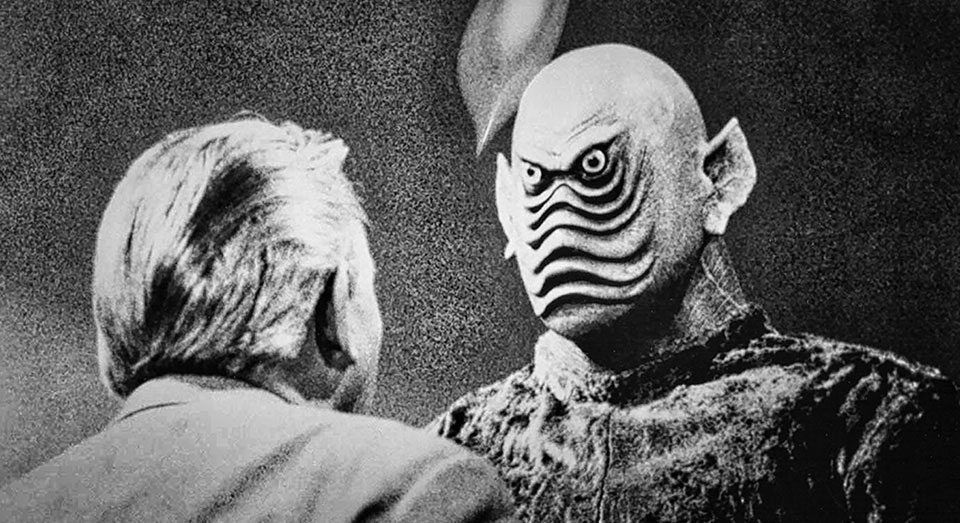 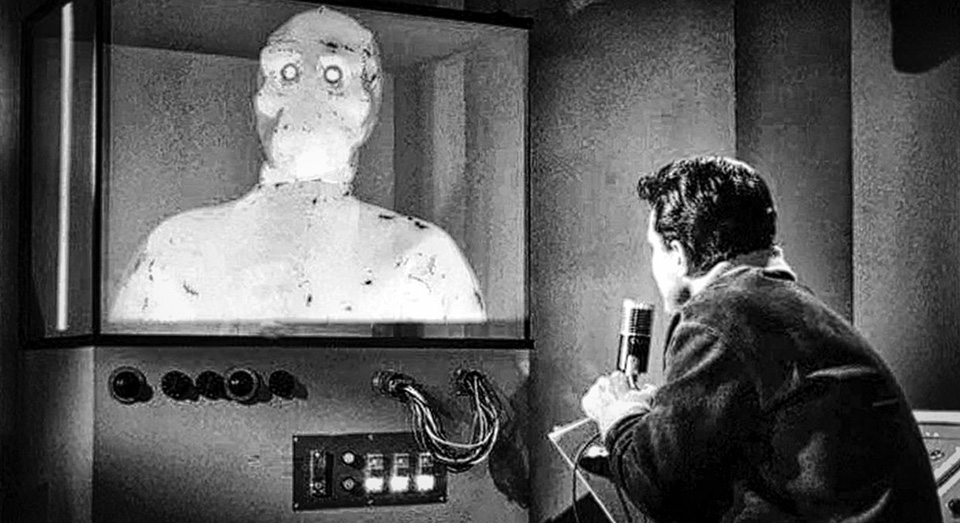 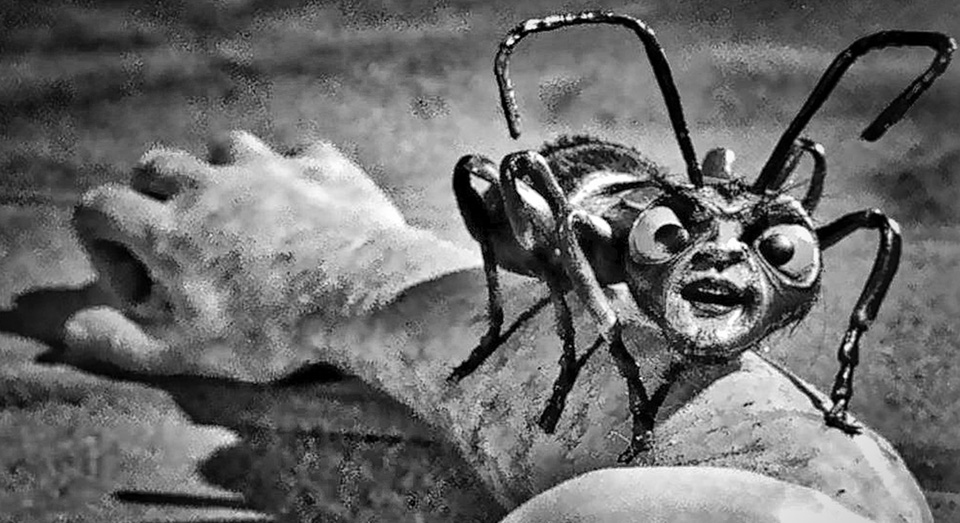 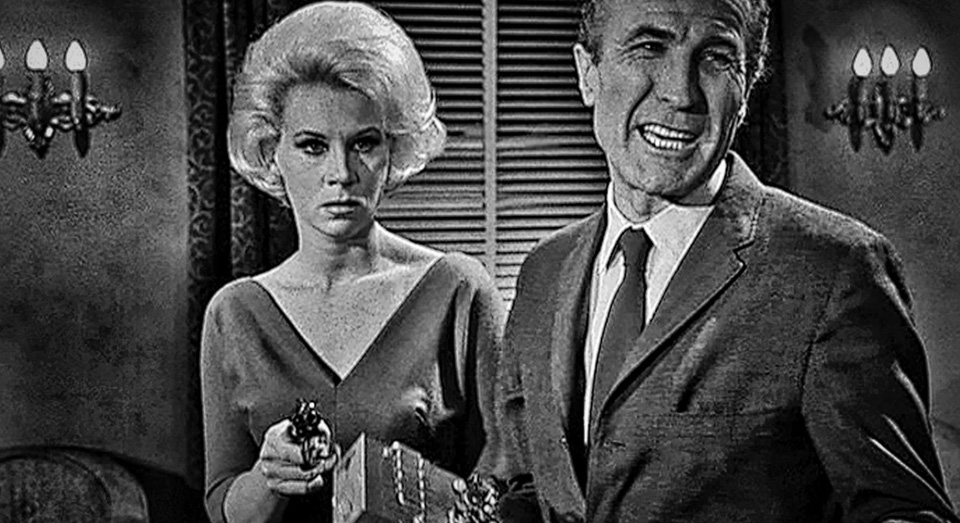 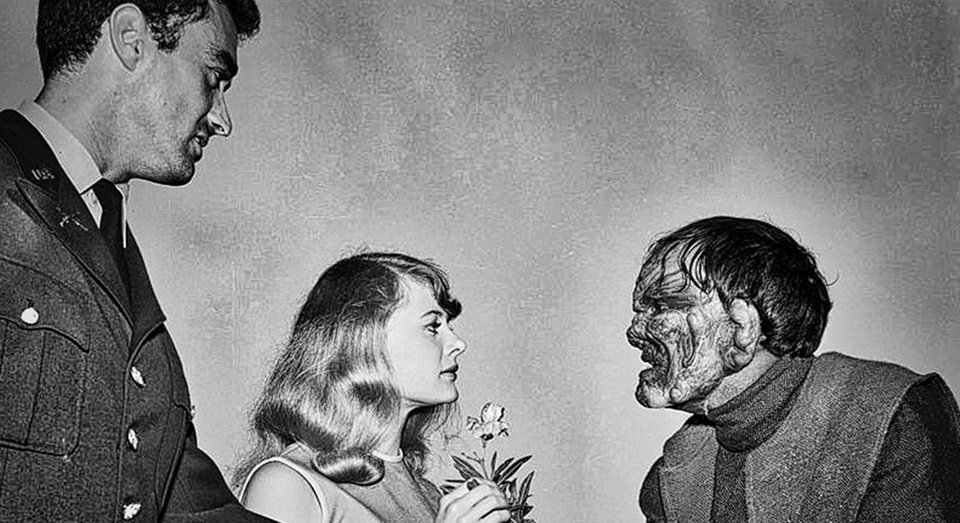 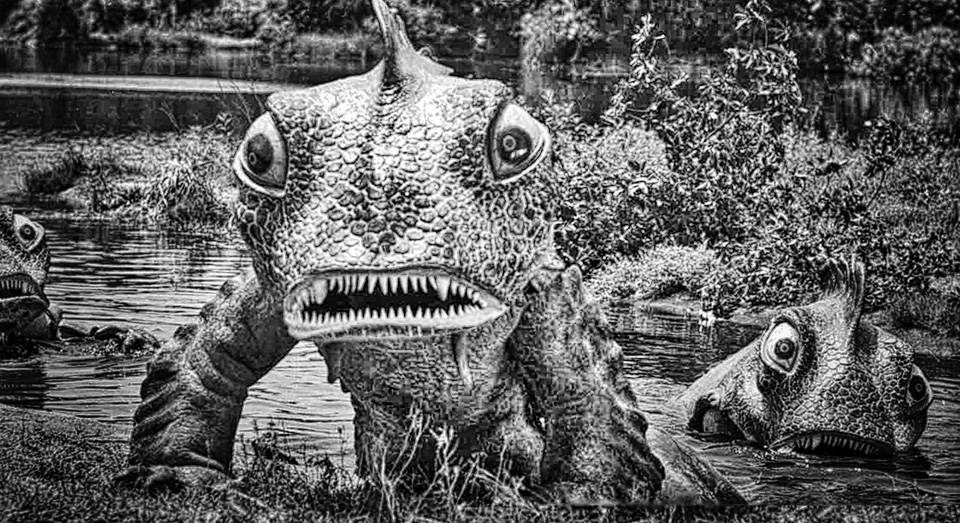 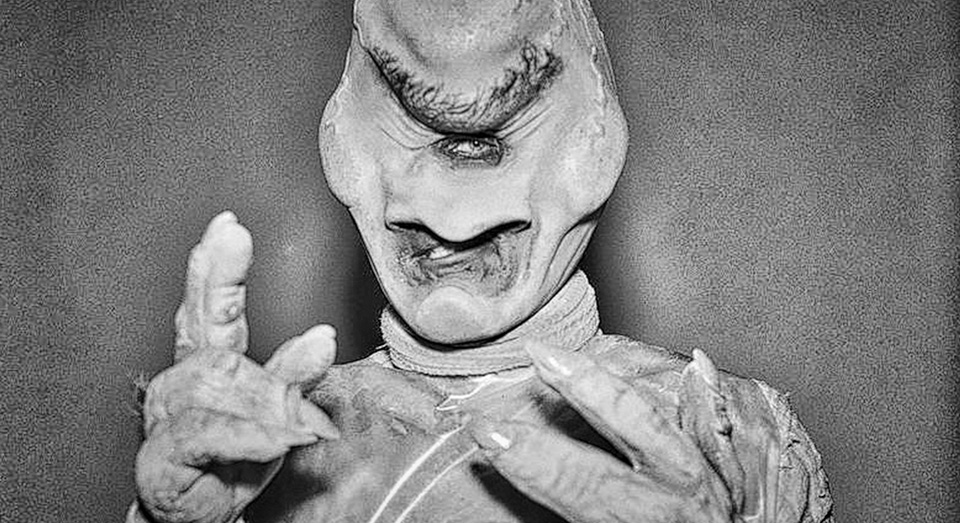 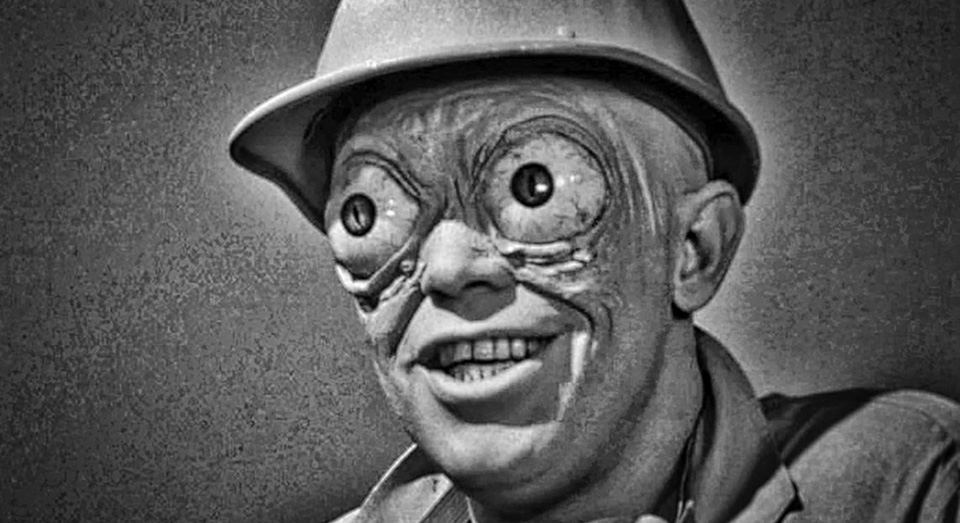 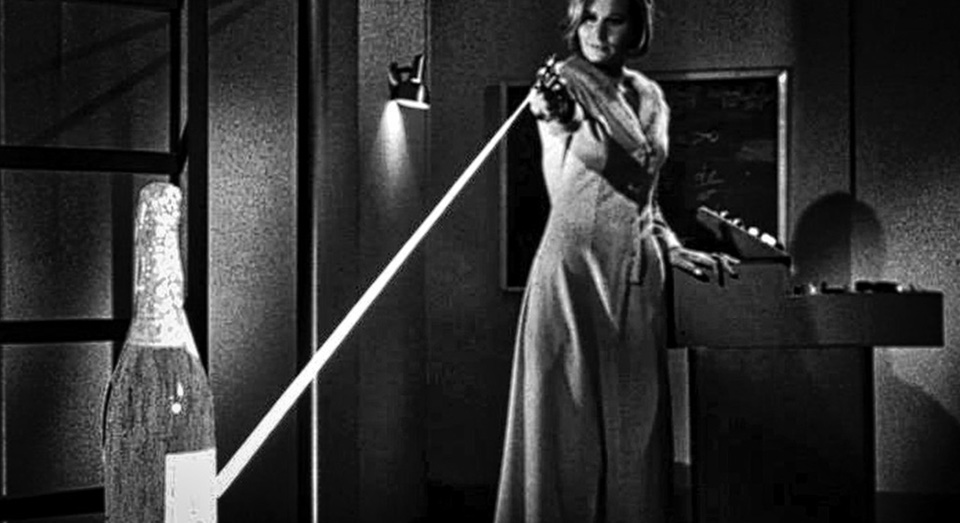 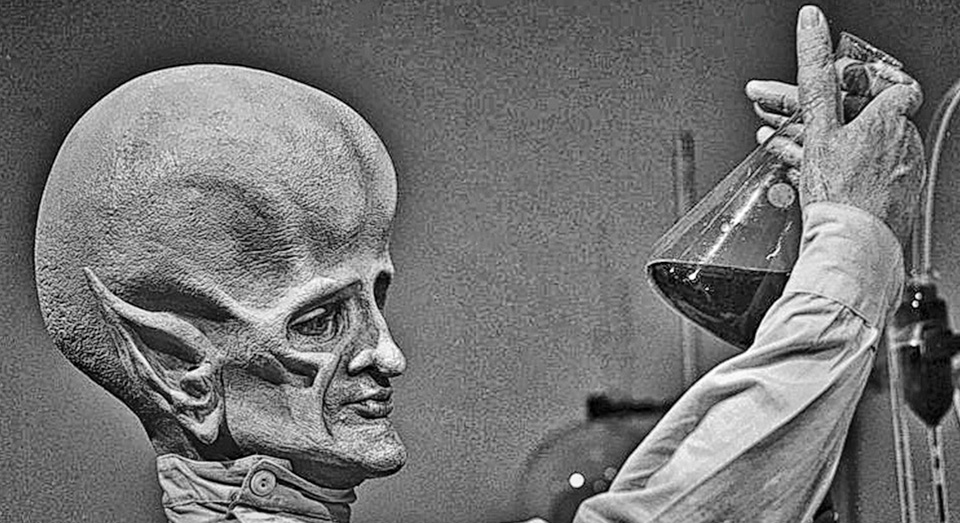 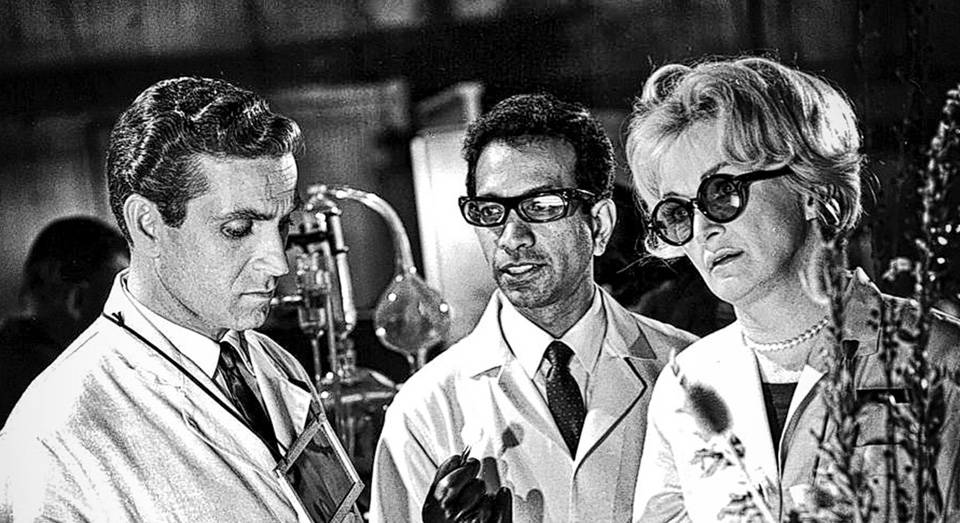 When Sci-Fi fans discuss their favorite old TV series, THE OUTER LIMITS frequently crops up. Although THE OUTER LIMITS reruns have been broadcast infrequently since it went off the air, over fifty years ago, and is available on home video, the show still has a legion of fans, perhaps not as large a fan club as “Star Trek,” but certainly as loyal.

The show has developed an almost fanatical following over the years, maybe because the show was shot in black and white, or because it only ran two years, or because many of the show’s original fans were barely in their teens when the show first aired.

What a lot of people seem to recall about THE OUTER LIMITS are the aliens, what Producer Joseph Stefano called, the “bears”. They were a varied lot, from the ant-like criminals, of “The Zanti Misfits,” to the alien controlled tumble weeds, of “A Cry of Silence”.

Most people don’t know that the “Control Voice”, heard at the start and end of every THE OUTER LIMITS episode, was voiced by the late Vic Perrin, who did not receive on screen credit. Perrin also did alien voice work on some Classic “Star Trek” episodes, including “Arena”.

A radio technician gets in contact with an alien, with unexpected results.

The Architects of Fear

A human is transformed into an “alien,” in an attempt to scare the people of Earth into cooperating with each other.

The Man With the Power

A man, with a special device implanted in his head, can control enormous destructive forces.

A scientist uses a special machine to turn a coal miner into the super man of the future.

The Man Who Was Never Born

A mutant from the far future travels back in time in order to prevent a plague which wrecked the world.

The government uses a top secret device to spy on scientists and civilians, with bizarre repercussions.

A scientist and a soldier swap consciousness, with unexpected results.

A guy with a metal plate in his head begins to hear the voices of talking rocks.

Earth soldiers are captured by aliens, and subjected to torture and brainwashing.

It Crawled Out of the Woodwork

A strange energy creature is kept locked up in an energy research lab.

Scientists develop a technique for sending living matter into another dimension, which may be the after life.

A living, prehistoric sea monster is found in the waters south of the border.

Alien criminals are sent to Earth, and promptly begin to do battle with humans.

Alien and Earth scientists take part in an experiment to teleport representatives to each other’s worlds.

Do Not Open Till Doomsday

An alien monster in a box poses a serious threat to the marital bliss of a young, newlywed couple.

A queen bee transforms into a woman, with the intent of mating with a male scientist.

A woman steals a force field device from an alien, with unexpected results.

The Children of Spider County

An alien comes to Earth to reclaim a son he conceived with an Earth woman, years earlier.

U.S. astronauts bring deadly spores with them when they return to Earth from outer space.

On an alien planet, a mutated human holds his fellow colonists captive.

A young drifter happens onto a group of people, in an old mansion, being held captive by an alien.

Two humans are transported to a strange world where they must battle aliens, with the fate of the Earth hanging in the balance.

An alien plots to take over the Earth with the help of a bright, fourteen year old boy.

Six square blocks of an American neighborhood are teleported by aliens to another planet.

The Production & Decay of Strange…

Outer space particles are mixed with radioactive elements in an Earth lab, with bizarre results.

A free-lance, secret agent is sent on a dangerous mission, to infiltrate a flying saucer landing site.

The Forms of Things Unknown

A strange young man, with a “time tilting” device, has the power to bring the dead back to life.

A killer soldier from the future is catapulted back in time to the present.

An astronaut, returning home after orbiting Venus, experiences strange side effects from his space journey.

An optical expert develops some glasses which allow him to see aliens.

After taking a “consciousness expanding” drug, a scientist goes on a killing rampage.

Demon With A Glass Hand

A man with a robot hand, (which holds the secrets to mankind’s destiny), battles weird time travelers from the future.

An expedition to Mars must cope with a deadly, and apparently invisible, enemy.

A miniature, alien world is created in an Earth laboratory.

A lawyer defends a robot accused of murder.

Four men, with alien brains, work together on an vast and mysterious project.

Keeper of the Purple Twilight

A scientist trades his emotions to an alien, in exchange for two mathematical formulas, which will allow him to construct a disintegrator ray gun.

In the future, a man creates a duplicate of himself, to kill an escaped alien monster.

On a simulated space journey, an alien messes with the minds of the human passengers.

The Brain of Colonel Barham

A wheelchair -bound astronaut donates his brain to a space exploration project.

The survivors of an airplane crash, floating in the ocean, end up inside an alien spacecraft.

Episodes are listed in order of airing.

The Galaxy Being | The 100 Days of the Dragon | The Architects of Fear | The Man With the Power | The Sixth Finger | The Man Who Was Never Born | O.B.I.T. | The Human Factor | Corpus Earthling | Nightmare | It Crawled Out of the Woodwork | The Borderland | Tourist Attraction | The Zanti Misfits | The Mice | Controlled Experiment | Do Not Open Till Doomsday | ZZZZZZ | The Invisibles | The Bellero Shield | The Children of Spider County | Specimen Unknown | Second Chance | Moonstone | The Mutant | The Guests | Fun and Games | The Special One | A Feasisbility Study | The Production & Decay of Strange… | The Chameleon | The Forms of Things Unknown | The Soldier | Cold Hands, Warm Heart | Behold, Eck! | Expanding Human | Demon With a Glass Hand | Cry of Silence | The Invisible Enemy | Wolf 359 | I, Robot | The Inheritors | Keeper of the Purple Twilight | The Duplicate Man | Counterweight | The Brain of Colonel Barham | The Premonition | The Probe